Classes that instruct one on how to work as a nurse aide in the area of Gig Harbor, Washington can be located on this page. To qualify for certification, it is important that a student completes a state sanctioned school course and passes both sections of the exams. 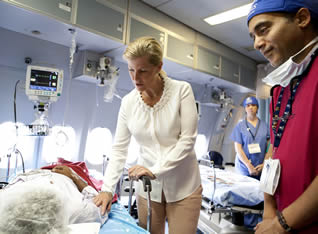 The state of Washington requires its programs to offer no less than 85 hours of training. Those hours are divided into both theory and supervised clinical practice, which are both taught at the same time. CNA programs are offered by hospitals, nursing homes, assisted living centers, community colleges, high schools, private training centers, government organizations, and many more. Completing an approved training program is a necessary step since the state does not allow a candidate who has not completed proper training to take the certification exam.

Registered nurses, licensed practical nurses, nursing students/graduates, Out-of-State nursing assistants, military trained medics, and other trained healthcare professionals are allowed to directly apply for the certification exam if the ADSA deems them qualified. They’ll need to provide proof of their education and training and submit their applications to ADSA. Once you are deemed qualified, ADSA will then send you the application forms for the certification exam.

The certification exam is a two part examination that consists of a written/oral test and a skills evaluation exam. Both tests are taken on the same day at an approved testing facility. If a candidate passes both tests, then his name will be added to the Nurse Aide Registry. Due to the number of nursing assistant applicants the state has asked Pearson VUE to help conduct, score, and release the exam results.

Once a person’s name is on the Registry that person will be allowed to apply for a nursing assistant certification that’s issued by the Washington State Department of Health. Employers will always look for this certification before hiring you. They will also verify your name on the Registry since all nursing assistants must be on the NAR within 4 days after starting work.

This city is located on the shores of Pierce County. The city’s name is also a bay on Puget Sound. The city claims itself to be “the gateway to the Olympic Peninsula”. According to the census of 2010, their total population was around 7,126 people. Gig Harbor has a total area of approximately 4.4 sq miles and has a population density of 1,485.2/sq mile.